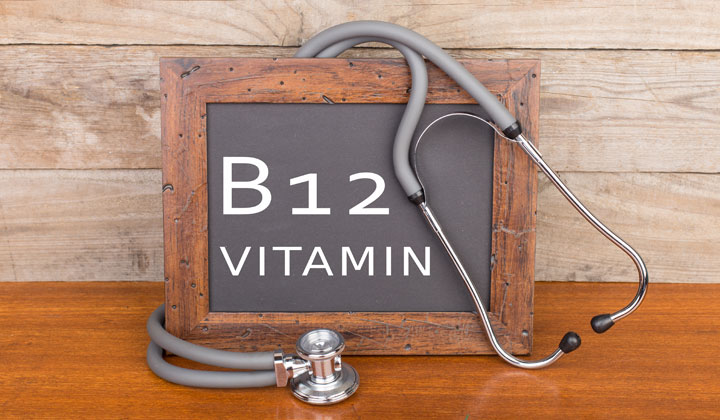 4 reasons I highly recommend supplementing with Vitamin B12

The Essential Role of B12

One study showed that supplementing with Vitamin B12 (as adenosylcobalamin) modulated the immune response by down-regulating inflammation. This may explain why B12 supplementation has been shown to reduce the severity of autoimmune conditions such as rheumatoid arthritis and eczema.

Vitamin B12 is also essential for cognitive function

A deficiency in cobalamin (Vitamin B12) can mimic the signs and symptoms of diseases that are commonly associated with aging such as Alzheimer’s, dementia, cognitive disorders, multiple sclerosis, Parkinson’s, and other neurological problems.

Vitamin B12 is also essential for cognitive function

It’s entirely possible that at least some of the symptoms we attribute to “normal” aging such as memory loss, cognitive decline, and decreased mobility are at least in part caused by B12 deficiency. Deficiency also plays a critical role in most cases of mental illnesses such as depression, anxiety, cardiovascular disease, low libido, and even cancer.

Statistically, B12 deficiency has been estimated to affect about 40 percent of people between 26-83 years of age, meaning a large percentage of our aging population. Since a majority of our culture has become captive to the Standard American Diet (SAD), we’ve lost the connection to our ancestral diet. That means that the majority of the population consumes a highly processed and low nutrient dense diet, far from how our ancestors lived, including how our great grandparents ate.

There was a reason why our great grandmothers nagged their children to take cod liver oil…that is right, it is packed with nutrients including Vitamin B12, Vitamin A and D, and much more.

Who is at risk for B12 deficiency?

Vegans and Vegetarians
Causes of B12 deficiency include inadequate intake from food sources, which is common in vegetarians and vegans, intestinal malabsorption due to low stomach acid, celiac disease, Crohn’s disease, or other gastrointestinal conditions.

Vegans and vegetarians are at much higher risk because B12 is only found in animal products. B12 is the only vitamin that contains a trace element, cobalt, which is why it is called cobalamin. Cobalamin is produced in the gut of animals.

It’s also the only vitamin we can’t obtain from plants or sunlight. Plants don’t need B12, so they don’t store it.

There is a common myth among vegetarians and vegans is that it is possible to get B12 from plant sources such as seaweed, fermented soy, spirulina, and brewer’s yeast. However, these plant foods believed to contain B12 actually contain B12 analogs called cobamides that block the intake of and can increase the need for true B12.

Women with Frequent or Recurrent Miscarriages or Infertility
Another population to consider B12 deficiency in are women with frequent or recurrent miscarriages or infertility. Both B12 and folate are required for making new cells. If either is deficient, that can lead to infertility, miscarriage, or birth defects.
People with Genetic Polymorphisms
Another population that may be susceptible to B12 deficiency is those with genetic polymorphisms affecting B12 assimilation and metabolism, such as MTHFR and MTRR.
Those Taking Some Pharmaceuticals
Finally, many pharmaceuticals such as antibiotics, birth control pills, and the diabetes drug Metformin has been shown to deplete B12 levels.

How do you test for B12 deficiency?

B12 deficiency is much more common in the general population than the general public and the conventional medicine establishment realize.

Data from the Tufts University Framingham Offspring Study suggests that 40 percent of people between the ages of 26 and 83 have plasma B12 levels in the low-normal range, a range at which many experience neurological symptoms.

Nine percent had outright deficiency, and sixteen percent exhibited near deficiency. Most surprising to the researchers was the fact that low B12 levels were as common in younger people as they were in the elderly.

B12 deficiency is often missed for two reasons:

This standard blood test measures the total amount of B12 in the blood and does not rule out functional B12 deficiency, which would indicate low level of active B12. Also, the low end of the laboratory reference range for serum B12 is too low. Many people who are B12 deficient have so-called normal levels of B12. For example, the lab reference range in the US goes down to 211 pg/mL in most cases, while in Japan and Europe, the lower limit for B12 is between 500 and 550

B12 levels between 200 and 350, levels considered to be normal in the US, are typically found in patients that exhibit clear B12 deficiency symptoms, including behavioral manifestations such as cognitive decline, dementia, and memory loss. Some experts have speculated that the acceptance of higher levels of normal in Japan and the willingness to treat levels considered normal in the US, explain the low rates of Alzheimer’s and dementia in Japan.

Although HoloTC is actually the most accurate test, since HoloTC represents the active vitamin B-12 in our body. This is because approximately one-quarter of circulating cobalamin (vitamin B-12) binds to transcobalamin (HoloTC) and it is this form of B12 that is available in the cells of the body. Unfortunately, testing HoloTC levels is not readily available in the US, and is only available, (at lease at an affordable price), in Europe.

After reading this, are you are wondering if you need B12?

I am quite certain we all need to supplement with B12 if we are not eating an ancestral diet full of organ meat and cod liver oil. I am a huge advocate of preventative medicine—it is clearly more difficult to reverse or cure a disease (such as dementia) than it is to prevent it.

I put together The Fantastic Vitamin B12 PDF you can download here, that summarizes and simplifies all this information on B12, including what foods are highest in this essential vitamin, plus recommendations on how to supplement.

treating disease after it has set in your body, is like
digging a well after your house is on fire

Here is to your health and wellbeing!